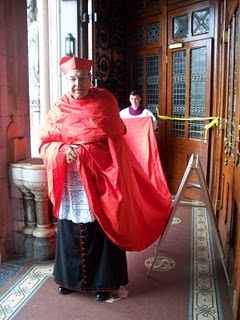 
"The other thing that is essential for the future is to make it absolutely clear that you need priests. There can be no Church without priests and this means you must have a seminary where young people will be prepared to go, and this means you must have an orthodox seminary. It means that you must have a seminary that is not sexually corrupt. Of course, we have experienced sexual corruption in the Australian seminaries. I can tell you of one poor lad who knew me from a previous place. He was a teacher who went on to become a priest. When it was announced that I had been appointed Rector of the Seminary I am told he ran weeping from the presbytery. He was a priest for only a few years when he left to live with his male partner after telling his poor mother that his partner was a Catholic. So I am talking from that sort of experience; the young people today are products of the culture in which we live and so we have to be vigilant. In the seminary they have to be taught to pray; prayer life and spirituality have to be the priority. I should add that when I am entering a diocese I have never thrown all the staff in the diocesan offices but when I became archbishop in Melbourne I instructed that in the Seminary there had to be Mass everyday; they were to have Benediction, Adoration and be able to pray the Rosary together — most people expect this to be a normal part of seminary life. However when I put this to the Seminary staff they said they wouldn’t accept it and en bloc offered to resign — so I accepted their resignations and it was one of the best things that had ever happened in the diocese. In other words when you start making changes you can expect resistance. I recall that when I announced the changes in the Seminary to a meeting of the Melbourne Council of Priests not one of them spoke in support of my plans. I knew there were people who did support it but there was not one who would speak out and support it at the time. I am sure that the reform of the Seminary was the most important thing I did when I was in Melbourne, even more so than the religious education. Melbourne is now regularly turning out good orthodox priests and of course when you get good young men going through then they attract others."