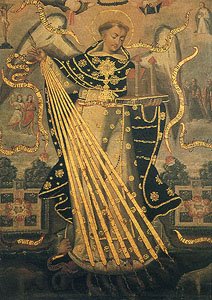 157. “Philosophical instruction must be grounded in the perennially valid philosophical
heritage and also take into account philosophical investigation over the course of time. It is to be taught in such a way that it perfects the human development of students, sharpens their minds, and makes them better able to pursue theological studies.” (CIC, c. 251) The philosophy of Saint Thomas Aquinas should be given the recognition that the Church accords it.* Especially in the courses on the history of philosophy, there should be a significant treatment of Saint Thomas’ thought, along with its ancient sources and its later development. The fruitful relationship between philosophy and theology in the Christian tradition should be explored through studies in Thomistic thought as well as that of other great Christian theologians who were also great philosophers. These include certain fathers of the Church, medieval doctors, and recent Christian thinkers in the Western and Eastern traditions.( Fides et ratio, no. 74.)


* See Optatum totius, no. 15; Pastores dabo vobis, no. 53; Fides et ratio, no. 43-44; CIC, c. 251; CCEO, 349§1. In articulating the mind of the Fathers of the Second Vatican Council on this point, the Congregation for Catholic Education, in its document on The Study of Philosophy in Seminaries, observed that “the repeated recommendations of the Church about the philosophy of St. Thomas Aquinas remain fully justified and still valid. In this philosophy the first principles of natural truth are clearly and organically enunciated and harmonized with revelation. Within it also is enclosed that creative dynamism which, as biographers attest, marked the teaching of St. Thomas and which must also characterize the teaching of those who desire to follow his footsteps in a continual and renewed synthesizing of the valid conclusions received from tradition with new conquests of human thought.”

219. Although various theological schools exist within the Catholic tradition, in accord with church teaching, the significance of Saint Thomas Aquinas as the model and guide for study and research in theology should be recognized.
Gepost door The Belgian Thomist op 20:11